A world first for Clyde Dam

Professor Mark W. Stirling of the University of Otago in New Zealand explains how ancient fragile geologic features have been used to set formal design earthquake motions at Clyde Dam

For the first time, ancient fragile geologic features (FGFs) have been used to set formal design earthquake motions for a major existing engineered structure; the Clyde Dam in New Zealand (Stirling et al. 2021). FGFs have long been recognised for their potential value in evaluating probabilistic seismic hazard (PSH) models for long return periods (e.g. Brune and Whitney, 1992; Brune, 1996; Hanks et al., 2013), but not used formally in this capacity until now. The mean 10kyr Safety Evaluation Earthquake (SEE) spectrum was developed for the dam from a probabilistic seismic hazard (PSH) model that incorporated the fragilities and ages of nearby FGFs into the hazard calculations.

The FGFs are balanced schist rocks, and based on ages determined by cosmogenic dating techniques, they have survived at least two large near-field earthquakes on the nearby Dunstan fault. The end result has been a significant reduction from a preliminary SEE peak ground acceleration (PGA) of 0.96g, to a final value of 0.55g. The study serves as an important proof-of-concept for future applications of FGFs in engineering design.

The Clyde Dam is the largest concrete dam in New Zealand and was constructed in the 1980s to a design PGA of 0.54g (Officers of the New Zealand Geological Survey, 1983). It is responsible for about 6% of New Zealand’s power generation. Construction of the dam was not without major challenges, namely:

The discovery of a significant shear zone in the dam foundations, requiring considerable additional investigations, design work, and cost.

Major landslide stability investigations and remediation works in the latter stages of the project. The reservoir behind the dam, Lake Dunstan, was eventually filled ten years after dam construction began.

Updating of the PSH model for the Clyde Dam commenced around 2005 with paleoseismic investigations of the Dunstan Fault (Van Dissen et al., 2007), followed by development of a preliminary SEE of 0.96g (Stirling et al. 2012).  International review of the preliminary PSH model recommended further updates to the PSH model, and for FGFs to be used to evaluate the model. The recommendations also coincided with a substantial revamp of the New Zealand Society on Large Dams guidelines, with increased quantification of PSH uncertainties being a major element of the revamp (NZSOLD, 2015).

FGFs had previously been recognised in the area of Clyde by Stirling and Anooshehpoor (2006). Probabilistic-based FGF evaluation methods initially developed for the proposed high-level radioactive waste repository at Yucca Mountain in the US (Baker et al. 2013) were then applied to Clyde. Cancellation of the Yucca Mountain project by the Obama administration in 2009 meant that the FGFs did not see formal application to repository design, but the project provided considerable methodological advances in the general topic area. Furthermore, a major study of FGFs and PSH at a site in coastal central California (Rood et al. 2020) has served as an important methodological case study. 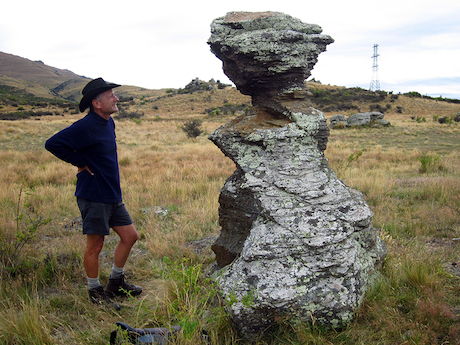 The Clyde study provides an important precedent for application of FGFs in formal engineering design. The support of the Clyde study and the US-based studies from a wide variety of scientists, practitioners, and major facility owners is expected to translate to further application of the overall method in the future. The method remains as the only way to evaluate PSH models for long return periods, which makes it extremely relevant to major facilities such as large dams. The duty of care to be exercised by the owners of major facilities is such that all available relevant and viable scientific criteria should be brought to bear on the problem, and the Clyde study has shown considerable leadership in this regard.

A workshop supported by the Southern California Earthquake Centre (SCEC) in 2019 brought together experts in the use of FGFs in PSH modelling to overview the work to date and define paths for the future. The results are published in Stirling et al. (2020), and future work will include undertaking further studies of the age and fragility of FGFs (including finding cost and time-efficient methods to acquire these data), and on evaluating alternative methods for incorporation of FGF criteria into PSH models.

The Clyde project was a team effort involving the many co-authors listed in Stirling et al. (2021). Collaborations with Rasool Anooshehpoor and Jim Brune provided key early motivations for this project. Contact Energy Ltd funded the Clyde project, and the Earthquake Commission of New Zealand funded the early work documented in Stirling and Anooshehpoor (2006). SCEC and Pacific Gas and Electric Company Ltd supported the FGF workshop held in 2019, and subsequent publication of Stirling et al. (2020). The FGF image has been supplied by David Barrell.