Temperature variation in rivers is a natural phenomenon and generally the ecosystem is resilient to such natural fluctuations. However, intensive damming of natural river systems can cause net shifting of temperature profiles and lead to the homogenisation of temperatures over longer periods. Researchers have developed a new framework to investigate the thermal impact of dams worldwide.

Selective water release from the deeper pools of reservoirs can alter the temperature of downstream rivers. Such thermal destabilisation can be detrimental to the riverine ecosystem by disturbing the growth stages of various aquatic species. To predict the impact of planned hydropower dams worldwide, researchers have developed a novel data-based framework called FUTURIST (FUture Temperatures Using River hISTory).

In their research published in Earth’s Future, Ahmad et al say that: “For copious existing or planned dams worldwide that are yet to be mapped of their thermal impacts, FUTURIST provides an efficient path forward to carry out a global thermal assessment and design sustainable hydropower expansion plans so that the upcoming dams can be operated in a more eco-sensitive manner than the existing ones.”

The FUTURIST framework is based on the key premise that a long record of the past thermal impact is a reasonable representation of the near-future impact due to planned dams. More specifically, it is used to answer the following questions:

The framework used historical records of in-situ river temperatures for existing dams in the US, and remote sensing observations for those in other regions, to train an artificial neural network (ANN) model that predicts temperature change between upstream and downstream rivers. The authors also explored the effect of climate change on riverine thermal regime change using the framework by forcing the ANN model with different warming scenarios towards the end of the century. The authors say the ability of the ANN model to capture nonlinearities in predicting dam's thermal impacts makes the technique transferrable to other dams with unobserved conditions. 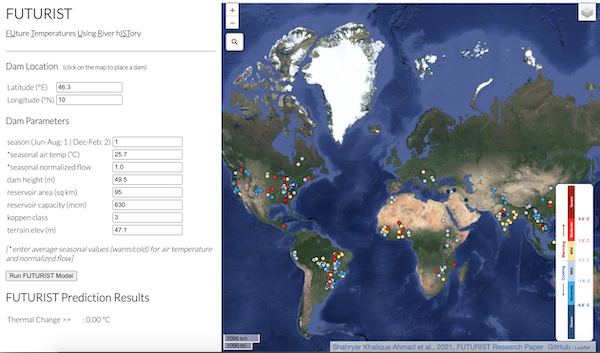 The ANN model predicted the likely thermal impacts of 216 planned dams. Results suggest that during the summer season, 73% of future dams will potentially cool downstream rivers by up to 6.6°C. Winter season operations were predicted to consistently warm downstream rivers by temperatures of up to 2°C. Reservoirs that experience strong stratification have the most potential to impact downstream pre-dam thermal regimes.

Such homogenised changes as predicted by the FUTURIST framework (warmer cool water periods and colder warm water periods) are the drivers of negative biological responses. The framework is designed to predict the changes in thermal regime defined on a wide temperature range rather than precision temperatures changes. The advantages of such a framework are (a) its wide adaptability, where the definition of thermal regime can be modified based on user's perception without affecting the model performance, and (b) reproducibility, where the framework can be reproduced with users’ self-perceived thermal regime and further accompanied with a more detailed model and localised understanding of thermal regimes.

The authors say that to the best of their knowledge, there is currently no such tool developed based on data and observations that can rapidly predict the likely thermal modification a dam will trigger downstream. FUTURIST was developed as a cost-effective and rapid prognostic tool to address this critical gap. It will help water managers justify more expensive studies based on physical models and surveys at a later date for the most important dam cases. When thousands of dams around the world are yet to be mapped of their thermal modification record, with many more being planned or constructed, it is fundamentally impossible to do detailed modelling of river temperature change caused by dams using current state of the art tools.

“We have presented here a data-based predictive and diagnostic tool as an efficient ‘pathfinder’ to identifying the cooling/warming impact of dams in light of many dams that are now being planned or built,” the authors say.

FUTURIST provides a feasible path forward to carry out a global thermal assessment of planned or existing dams. It acts as a baseline filter for promoting further dialogue between stakeholders for re-assessment of dam building plans, or for deciding on the merit of expensive and definitive thermo-hydrodynamic surveys for a more limited set of dams that are likely to be flagged as ‘high impact’ according to FUTURIST.

“Our analysis elucidates the need to include thermal pollution as an integral part of dam planning and operations to ensure safety and sustainability of the ecosystem,” Ahmad et al conclude.