Hydropower is working in partnership with other renewables across the grid.

Sustainable hydropower and green hydrogen will work better together, according to the International Hydropower Association. An ambitious new target which calls for at least 100 million tonnes of green hydrogen annually by 2030 to help reach global net-zero targets, will require the support of the hydropower sector, IHA Chief Executive Eddie Rich says.

Green hydrogen is forecast to have a large role in future clean energy systems and is produced using low-carbon electricity such as hydropower, wind and solar.

Former Australian Prime Minister Malcolm Turnbull, Chair of the Green Hydrogen Organisation GH2, says that green hydrogen is a vastly superior technology to fossil fuels and will inevitably replace them – the only question is when.

IHA believes that hydropower is poised to play a vital role in supporting the growth of green hydrogen, which has the potential to provide 13% of the electricity demand required by 2050 to meet net-zero goals.

Canadian company NeoGreen Hydrogen Corporation appears to be forging ahead with such a partnership. Earlier in the year the company signed a cooperation agreement with Paraguay’s state-owned electricity administrator ANDE, to develop commercial-scale hydrogen production from the 14GW Itaipu hydropower project. Shared by Brazil and Paraguay on the Parana River, hydrogen will be produced using the excess green energy resources from Paraguay’s 50% share of output from Itaipu, and this will commence with a pilot project of up to 50MW.

As energy demand increases in Ghana, the government is seeking to diversify the country's energy mix and find innovative ways to integrate variable renewable energy into its national grid.

A partnership between the United States Agency for International Development (USAID) and the US Department of Energy's National Renewable Energy Laboratory (NREL) has worked with Ghana's Bui Power Authority (BPA) to add power from solar photovoltaic (PV) to an existing 400MW hydroelectric dam.

The first 50MW of PV within the existing Bui hydroelectric dam site is scheduled for completion by late 2022, with plans to grow PV capacity to 250MW. The plant will also contain a 20MW hour battery energy storage system and controls so the plant can manage the variability of solar and increase the country's power sector reliability.

"The global challenge of climate change, as well as the need to secure energy supply, makes the development of the hydro-solar plant very important for Ghana and West Africa," said Peter Acheampong, Deputy Director of Renewables at BPA.

Once its full capacity is online, this first hydro-solar plant in West Africa will help Ghana cut its power sector greenhouse gas emissions by 235,000 tons per year.

One of the world’s largest floating solar PV power plants, Cirata, is under construction in Indonesia. The 145MW installation on the existing Cirata hydropower reservoir is expected to be completed in late 2022.

The project is being built on a 225ha section of the reservoir in West Java and will be integrated into the Java-Bali grid, which is the backbone of Indonesia’s electricity supply and provides power to more than half of the nation’s population.

Currently solar PV has a very small share of the power generation mix in Indonesia, but it does have strong potential.  Construction of the Cirata floating PV facility is described as being a key milestone in Indonesia’s clean energy transition and highlights the key role hydropower can play in accommodating the rising share of solar PV generation in the Java-Bali power system.

Indonesia says it plans to develop a further 60 floating PV installations by 2025. 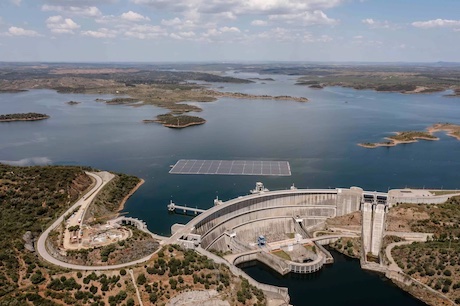 The first floating solar park in Alqueva, the largest in Europe in a reservoir, was inaugurated on 15 July 2022

The largest floating solar plant in Europe on a reservoir – at the Alqueva dam reservoir in Portugal – was inaugurated in July 2022.

With close to 12,000 photovoltaic panels - occupying 4 hectares, equivalent to around 0.016% of the total area of the Alqueva reservoir -, the new platform has an installed power of 5 MW and the capacity to produce around 7.5 GWh per year, which means that it can supply more than 30% of the families in this region in the south of Portugal (Portel and Moura).

The project involves a total investment of €6 million euros and the installation of a battery system is also planned, with a nominal power of 1 MW and a storage capacity of around 2MWh. All these technologies will be using one single connection point to the existing grid promoting asset optimization and efficiency while reducing environmental impacts.

"Alqueva is today an example of innovation and sustainability, which we will soon strengthen with the new project won in the first floating solar auction in Portugal. EDP is a global pioneer in floating solar technology, which is a landmark leap in the expansion of renewables and in accelerating the decarbonisation process," Miguel Stilwell d'Andrade, CEO of ED said, adding that "the bet on hybridization, by combining electricity produced from water, sun, wind and storage, is a logical path of growth in which EDP will continue to invest - it allows us to produce cheaper energy, optimizes resources and with minimal environmental impact."

In addition to these advantages, there is also an innovation drive in the floaters that support the solar panels: recycled plastic combined with cork composites. The solution, which is being tested for the first time in Alqueva, is the result of a partnership with Corticeira Amorim (through Amorim Cork Composites) which developed a more sustainable formula for the floaters manufactured by the Spanish company Isigenere. This innovation, in addition to contributing to reduce the weight of the platform by 15%, also helps to decrease the CO2 footprint of the project by about 30%.

Floating solar technology is decisive in the use of resources and the expansion of renewable energies, which contribute to tackle energy dependence on other sources and accelerate the energy transition process. This first large-scale project in Alqueva - which went ahead after the success of the first pilot initiated in Alto Rabagão about seven years ago - is thus in line with EDP's strategy of investing in innovation and renewable projects and being 100% green by 2030.

This project was also critical in accelerating the creation of new investment opportunities in clean technologies and opening doors to auctions that contribute to the urgent acceleration of renewable energies. In the first floating solar auction, which took place in April this year, EDP was awarded a 70MW lot in Alqueva, which corresponds to the highest capacity awarded in this auction.

This project will reinforce energy production from this reservoir, being capable of producing 300GWh annually, supplying 92,000 homes and avoiding the emission of more than 133,000 tons of CO2. The economic viability will be ensured by the scale of the project and, once again, by the hybridization component, which will make it possible to combine different technologies and ensure a balance at the price level, similar to what is already intended with the first floating solar park in Alqueva now in operation.