Hydropower and the Alaska Railbelt

A report into the potential impacts of achieving an 80% renewable energy portfolio standard on Alaska’s Railbelt electrical grid has been carried out. One of the key findings underpins the important role of flexible hydropower in balancing supply and demand and providing fast response to system outages.

In December 2021, the Governor of Alaska, Michael Dunleavy, requested support from the National Renewable Energy Laboratory (NREL) to perform a quick preliminary analysis of the potential impacts of achieving an 80% renewable energy portfolio standard (RPS) on Alaska’s Railbelt electrical grid.

The Railbelt runs north to south from Fairbanks through Anchorage to the Kenai Peninsula and represents 75% of Alaska’s electric load. A winter peaking load that is not interconnected to a larger grid, the Railbelt is described as being “a unique electrical system in the US”.

Due to the quick turnaround time of approximately six weeks, in the report published in February 2022, NREL focused on:

NREL admits that this limited approach “does not definitively identify the optimal RPS portfolio or provide a comprehensive cost analysis”. However, it can provide insights into the basic techno-economic feasibility of an 80% RPS and help identify other elements such as the potential need for new transmission and storage, and the opportunity to diversify the energy mix to increase resilience to fuel price volatility and reduce reliance on single fuels.

“This analysis is a starting point for additional research and consideration of investment or policy options,” NREL says. “The analysis includes development of a Base Case scenario that assumes no additional renewable deployments beyond the planned Bradley Lake Expansion – Dixon Diversion and 25MW of small run-of-river hydropower. We then developed five 80% RPS scenarios with various mixes of renewable energy technologies including solar, wind, hydropower, geothermal, biomass, landfill gas, and tidal energy.”

The scenarios include one where hydropower provides about 65% of annual generation, and one where wind and solar combined provide about 60% of annual generation. Each of the scenarios was simulated over a full year of system operation to ensure the demand for electricity could be met with the available resources, including under conditions of extended outages of major transmission lines and generation resources. 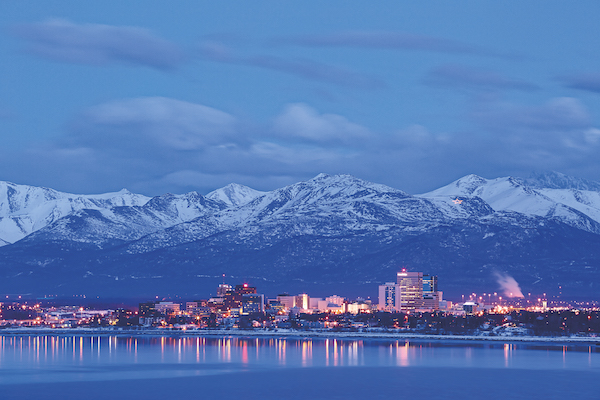 Anchorage in Alaska. The Railbelt electrical grid is a winter peaking load

One of the report’s key findings was that “flexible hydropower and storage are important elements of balancing supply and demand and providing fast response to system outages”. In the cases with more wind and solar, there is greater variability of the resource mix over various time scales. Flexible renewable resources such as hydropower, along with energy storage, help address this variability in net load.

Various scenarios plotting the operation of the Bradley Lake hydropower plant showed how existing and potential new flexible hydropower can help further deployment of wind and solar. As the report states: “The inherent storage in these plants helps balance system load and reduces the amount of dedicated storage needed for this purpose. The amount of wind and solar in several scenarios can potentially lead to curtailment, or overgeneration, when the supply of renewable resources, combined with flexibility limits of thermal power stations, results in more electricity than can be used. This often occurs during periods of low demand.

“Curtailment of wind and solar is not technically difficult to manage by reducing the output of these resources in a manner similar to that of other generation resources, but it results in unusable energy and decreases the economic value of these resources. However, the Railbelt power system, which features flexible hydropower, flexible thermal plants, and existing or planned levels of energy storage, can accommodate deployments of wind and solar that provide about 60% of annual demand with limited curtailment. In the 80% renewable scenarios, we include three battery storage systems (one in each zone), all of which are currently under consideration. “

In addition to shifting supply of renewable resources and avoiding unusable generation, storage also provides fast responding operating reserve. An important component of maintaining system frequency stability is ensuring the system can respond to a loss of a generation resource, such as a transmission outage.

The Railbelt system relies on three elements to maintain a stable frequency in the moments following an outage: the inertia in rotating generators in fossil and hydropower generators, the ability of these generators to respond to changes in frequency via primary frequency response, and fast response from batteries. Alaska was one of the pioneers in the use of batteries in this application, and this role will likely increase in scenarios which include more wind and solar deployment.